Poetry that opens luminous spaces by a World-Class poet

Olav H. Hauge (1908 – 1994) was born in Ulvik, the fjordside village where he spent almost his entire life. While his mother Katrina had deep roots in Ulvik, his father Håkon came from Sogn, several mountain ranges and one fjord farther north.

The young schoolboy became good friends with the town librarian, who guided him to the classics of national and world literatures. He would sneak away from farm chores, climbing a nearby pine tree to immerse himself in worlds opened up by the printed word. He learned English and German in school; his uncle sent him books from America. And Hauge, a master autodidact, taught himself French just by reading.

Due to health issues and his struggles with math, Hauge’s formal education ended with junior high school. In 1929, Hauge enrolled in the horticultural and agricultural school at Hjeltnes. In his journal he lamented: “I guess I had better put literature and language on the shelf. Soon I shall have forgotten it all.”

His oldest brother inherited the family farm – as was the custom in Norwegian farming society. Olav later inherited a smaller plot of land, with a new house that his father built. For the rest of his life, he made a meagre living as an apple grower on his five acres, on which he had roughly 200 trees. The panoramic view from this farm, perched above the village, takes in the changing seasons and the many moods of the fjord and surrounding mountains.

His first book, Embers in the Ashes, published in 1946, may be read as an image of hope. After five years’ occupation by Nazi Germany, with many cities and towns bombed or torched, Norway faced the daunting task of reconstruction.

Ulvik is at the heart of Norway’s apple-growing region, the sheltered fjordscape of Hardanger. A mild climate and long summer days – with up to 20 hours of sunlight – result in exceptionally aromatic fruit. The first apple seeds were planted by Cistercian monks in the 13th century. There is nothing romantic about being an apple grower. In his journals, Hauge speaks repeatedly of how the chores in his orchard would get in the way of other things he preferred to do – his reading and his writing.

On the Eagle’s Perch, published in 1961, won the Norwegian Critics’ Award. His next volume, Droplets On the Eastern Wind (1971), won even wider praise, especially from younger Norwegian poets. These were taken by his “thing” poems such as “Sledgehammer”, “Saw” and “Scythe”. “The Cat” is shaped like a cat. Hauge touches on the immediate – whether tools and other objects, the landscape, or farm tasks such as haying. Yet he chafed at the idea of being categorized, hence his self-ironic poem “Old Poet Tries His Hand as a Modernist”.

Hauge is a master at erasing the distance between his reader and the subject matter. In “Swine”, from his next collection Ask the Wind (1971), his vivid details of the darker aspects of history, such as the aftermath of Gettysburg, create an overwhelming immediacy.

Only at a late age did Hauge find the woman in his life. In 1975 Bodil Cappelen, an artist and master weaver, moved to Ulvik. Soon he built an annex with a studio for her. When they were married three years later, Hauge was 70 years old. He penned a number of poems to her, including “Carpet”.

Idar Stegane, a lifelong friend and leading expert on the poet, divides Hauge’s poetry and spiritual growth into three stages: “Fallen from grace”, “The solitary outsider”, and “At home on this Earth”. Certainly this third stage coincides with the happy years he spent with Bodil.

His literary horizon was hardly limited to the Western world. From an early date he sought inspiration from Chinese poetry and Japanese haiku. In addition, Hauge’s journals reveal a lifelong fascination with Eastern spiritual traditions.

His journals, published posthumously, span 70 years and run over 4000 pages. The entries complement and yield insights into Hauge’s life and poetry, and at times rise to pure poetry. But readers will look in vain for cultural gossip, confessions and accusations.

In many poems we sense Hauge’s heightened awareness of the moment, but he never turns his back on the ordinary. On the surface, the subject matter may seem mundane, but by pulling our awareness to the everyday and to the things that surround us, Hauge renews the world for us. The poet speaks from a luminous space and invites the reader to enter.

Likewise he lends a transcendent quality to ordinary tasks: “Opening the Curtains”, inspecting scythes, seeing “Two Rowboats on the Fjord”, or simply “Pausing Beneath an Old Oak on a Rainy Day”.

Like few others, Hauge brings the landscape alive: the nearby waterfall, the rotting tree stump, a wobbly boulder, mountain pastures and hayfields. And on a north-facing mountainside, the snowfield that never totally disappears.

It should come as no surprise that Hauge’s poetic awareness embraces the ancient – whether it’s a trapping pit, a stone grave, or the changing vegetation at an abandoned quarry or mountain farm. In many of his poems we can hear the music of the Norse bards!

Much has been made of Hauge’s struggles with madness, and for good reason. All in all he spent five years in Valen psychiatric hospital. The first time, in 1934, he was incarcerated for three and a half years. His journal entries speak of deep doubts and of “the other man”, who according to Hauge was everything he was not. “The Shadow”, from 1946, hints of this. Looking back at Valen, he wrote moving poems such as “The Wheat Field” about a print on the wall. “The Cell”, published posthumously, is one of the last Hauge wrote. Even here Hauge found a luminous space!

His most renowned and quoted poem, “It is that Dream”, speaks of the yearning we all share. 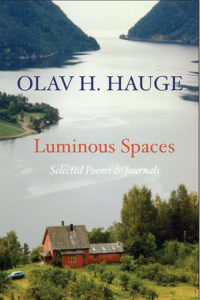 Olav H. Hauge’s poems have been published in a number of countries, from USA via France and Germany to Korea.