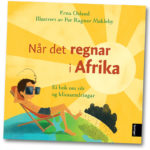 A fact book for children all about meteorology. What creates the weather? Where does the wind come from? Why does hail come down at the speed of a racing car and why does it even rain in the first place?

This is a book about weather, but also a book about Styrk, who lives in Norway but thinks a lot about Africa. When will the rain fall on his grandmother’s parched fields, he wonders. Because it must be due soon, surely, unless someone has stolen it? This is the story of Styrk, but also a fact book about meteorology. At the end of the book you can read about how the weather is in the process of changing here on Earth. Plus, you’ll find out where the rain in Africa went!

Illustrated by Per Ragnar Møkleby.

Erna Osland (b. 1951) is a prize winning and much loved author of both fiction and wide range non-fiction books for children. Her inviting tone and ability to delight and surprise the reader transforms her non-fiction books into pleasurable safaris of laughter and learning. Osland has won a number of Norwegian and international prizes for her books. Some of the books are translated.

Per Ragnar Møkleby (b. 1974) is an illustrator and graphic designer. He attended Kingston University in London and has illustrated books, newspapers and magazines since 1998. He was awarded the Children’s Book Prize for Førstemamma på Mars (First Mum on Mars).